Try to just concentrate on picking each note individually but with a gliding motion, similar to a strum. Do not hold all the notes down like a chord and don't lift the pick after hitting each string, sweep straight on to the next string. 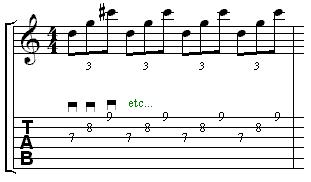 This is simply the reverse of the above example. 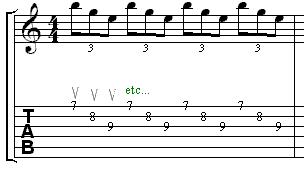 Lot's of sweep picking sequences consist of simple arpeggios. This is an A minor arpeggio that uses just the notes A, C and E.

This is an extension of the previous exercise. Keep your fingers on frets 8 and 12 whilst you tap the 17th fret.

This exercise isn't as complicated as it looks. Whilst your finger is holding down fret 12 tap your middle finger onto fret 17. Slide your tapped finger up to fret 18 then back down again before removing the finger. The removal of the tapped finger should sound the pull-off to fret 12 (still held from earlier). Then pull-off to fret 8 in the normal manner.

Below is another A minor arpeggio. The shape was derived from the 'E shape' using the CAGED system.

This exercise is an A major arpeggio (A, C# and E). It involves playing three notes on the same fret on adjacent strings. For this you must learn the technique of rolling. This consists of fretting a note then using the same finger to 'roll' onto the next string (same fret). The technique helps you avoid holding all the frets down at once (which causes the notes to bleed into each other).