The following alternate-picking exercises do not have to be played with a down, up, down, up pattern. Lots of people neglect starting on an up stroke (up, down, up, down and so on). Give it a try it can be tricky at first.

This is the simplest alternate picking exercise there is and will allow you to concentrate on your picking hand. You can try this on an open string if you want. Play four evenly distributed strokes for every click of the metronome.

This exercise is harder than you think. Alternatively try 7 5 7 5 and so on. Try it fast but make sure you are in time and hitting each note cleanly. Metronomes are vital for alternate picking exercises so get one now.

Now that you can alternate pick on one string you have to start moving across the strings. Since there are two strokes (down and up) it is easiest to play even numbers of notes on each string. Make sure you start each new string with a downstroke.

This exercise descends through the A minor pentatonic scale. This is played entirely in the 5th position so your 3rd finger should only play the 7th frets (use your 4th finger for the 8th frets). 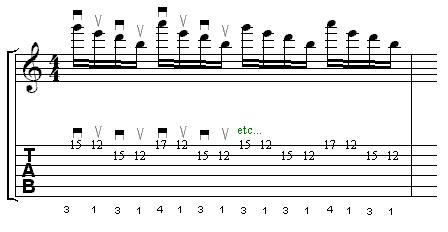 Being able to alternate between open strings and fretted notes is a vital skill for all you rock and metal guitarists. It is more difficult than playing just fretted notes or just open strings because every time you fret a note the string depresses and requires you to adjust the picking motion.

Now that you are familiar with alternate picking you can use it to explore the fretboard. Synchronise the change in fretting hand position with the downstroke at the start of each beat.

Alternate picking can be applied to triplets and sextuplets. In a sextuplet, six notes are played in the space that four normally would. Play six evenly distributed strokes for every click of the metronome.

Switching between 16th notes and sextuplets can be very tricky. In this example you play four evenly distributed strokes on the first click of the metronome, then six evenly distributed strokes on the second click. Changing speed on every beat will feel awkward at first but practising this will aid your soloing and shredding skills. Focus heavily on the first note of each beat, this will help you stay in time.

Play six notes for each beat of the metronome.

This exercise gets you thinking about more complex patterns for your fretting hand. 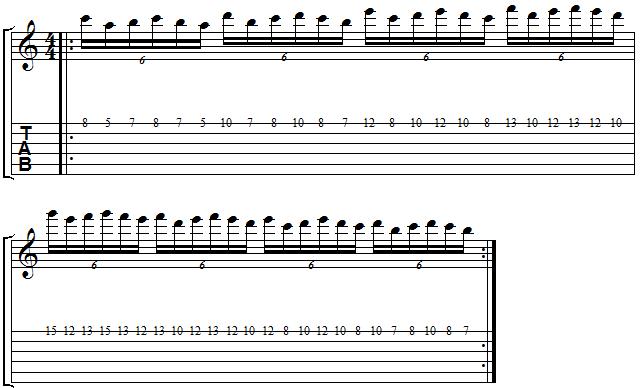 In this exercise, try not to let the fretting hand interfere with smooth alternate picking motion you have developed. 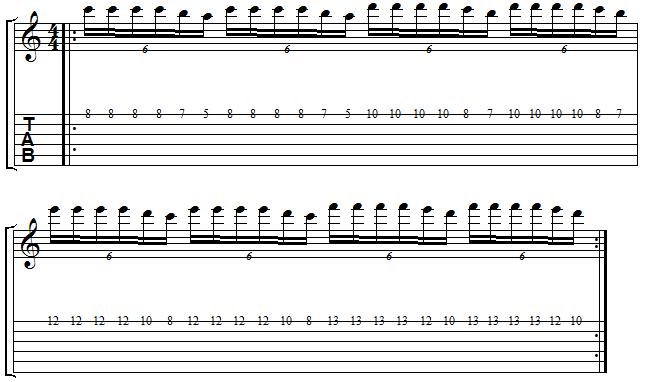 This exercise is comprised of sextuplets and involves a lot of string crossing. It starts on the second string but only three notes are played. Therefore, you are going to have to start the next three notes (on the high E string) with an upstroke to maintain the alternate picking. Play these first six notes on a loop to get used to this. Try starting on an upstroke and see how that affects the exercise.

This exercise uses is similar to previous ones. However, because of the string-skipping your picking hand is given more of a challenge.

This exercise involves more string-skipping. Make sure you maintain the strict down-up down-up picking throughout.

This exercise is a progression of the previous one that takes you up the fretboard. 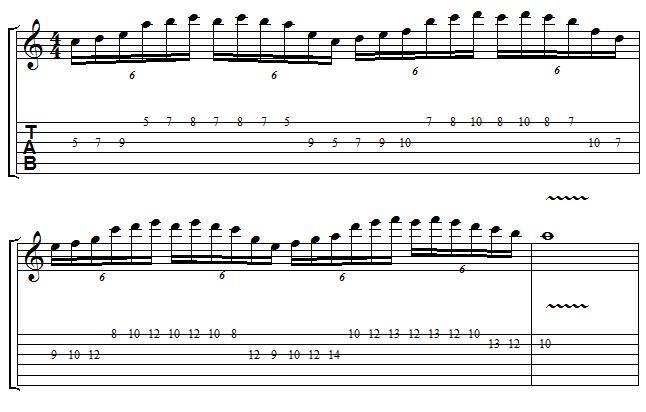 This exercise is a repeating sequence of 8 notes. If you find it tricky then play the first four notes of the sequence on a loop, then do the same with the second half of the sequence. After all, exercises are about breaking things down into their component parts.

This exercise is very tricky indeed. It consists of playing a three-note pattern, and as it's alternate picked, you'll have to start the first three notes on a down stroke and the second three notes on an up stroke.