As we know, the major triad forms a base from which other chords are created and named. See what happens when we add the sixth note of the C major scale to the C major triad.

The chord below is a five-string chord comprised of the notes C, E, G and A. Adding the sixth note (A) brings out a different sounding chord whilst retaining similar characteristics. Because we have used a triad from the C major scale the chords name starts with C major. The sixth note is also added so we just add sixth to the name, therefore the chord is referred to as C major sixth (or C6 for short). 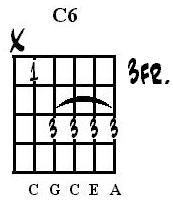 Now that we know the formula for a sixth chord we can use this information to work out what notes are in a sixth chord of any given key. Below you will see a table that has the major scale written out in all 12 keys. The 1st, 3rd, 5th and 6th notes of each key have been highlighted.

Question - What notes are in an A major sixth (A6) chord? Answer