Volume swelling (otherwise known as violining) is a technique where the volume control on an electric guitar is used to produce a crescendo like effect. You may notice the sound produced during a volume swell is much softer. This is because a volume swell cuts out the attack of the note. The attack refers to the initial burst of sound that you hear when you pluck a note (which is sharper than the overall sound of the note). This initial burst of sound is followed by a slow decay in sound.

A common method of achieving a volume swell involves wrapping the pinkie of the picking hand around the volume control whilst leaving the rest of the hand free to pick the strings. The volume controls on some guitars make this technique very difficult, if not impossible. In this situation you would be forced to use a volume pedal. 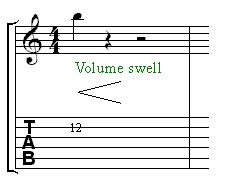 This technique can be used to help the guitar become a more expressive instrument but like most techniques it should not be overdone. Above is an example with a single note, but you can try it with octave chords for a different effect. Remember to start with the volume completely off and turn it up gradually after the string is plucked.